I was looking through a book of moths over the holiday and decided to make some. I found the Death’s Head Hawkmoth and remembered seeing one a few years ago outside my back door. I have never seen “Silence of the Lambs”, but I am told by the internet that the moth features in the film (I know I have to watch the film!)

It’s fascinating too that all three species love honey so they are often found in bee hives slurping up the sweet delight. They also emit a squeak or chirp when alarmed.

I suppose it makes sense that the hawkmoth should be symbolic of death. The clue being not just in their incredible markings clearly showing a skull but also in their Greek names.

Here’s what I found in Wikipedia ” Atropos was the oldest of the Three Fates, and was known as the “inflexible” or “inevitable.” It was Atropos who chose the mechanism of death and ended the life of mortals by cutting their thread with her “abhorred shears”. She worked along with her two sisters, Clotho, who spun the thread, and Lachesis who measured the length. “

So that’s Atropos and Lachesis accounted for. As for Styx, well that’s the river of death between earth and the underworld in Greek mythology but you already knew that didn’t you! 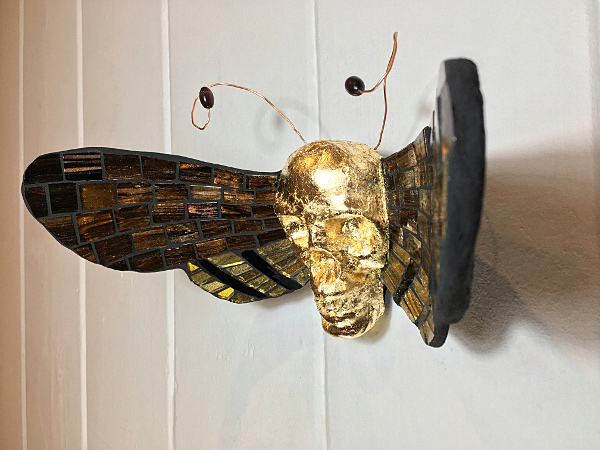 COME WITH ME I’LL TAKE YOU THERE!

Picking Up The Pieces

Kate Rattray — The Face Behind the Mosaic