Roll Up For The Greatest Show On Earth!

Yesterday evening just before the sun went down I managed to close shop at Somerset Crafts down on the Avalon Marshes in Somerset in time to see thousands and thousands of starlings swooshing over the gallery and on down to the heath. This happens every year at about this time and we have many visitors from all over the world who come to see the murmurations.  This year I would have thought could be a record year for numbers. I must have seen at least 15 large flocks pass by, (and there were probably more before I went outside) some right over my head and others in the distance. It’s hard to say but the numbers of each flock must have been well over a thousand, maybe several thousand as each flock took about  a minute to pass by and they spread out across the sky.

If you are lucky you see them sky dancing – performing amazing patterns in the sky. From where I stood last night it looked as if they were heading over the marshes and perhaps if you were a bit further west you would have seen a most spectacular display.  I saw a wonderful display a couple of years ago but failed to get good photos and in the end I just wanted to watch and not be hindered by taking photos. It really takes your breath away.

Here’s a great video and a couple of photos of the starlings  taken a couple of years ago by my friends Val and Al, who exhibit and sell their photos at Somerset Crafts gallery.

What I find so thrilling is not just the beauty of watching them but also the sound as they pass by overhead. The flutter of thousands of wings. It sounds almost like white noise. And talking of white, as I stood there last night they dive bombed me in white rain!!! I put my hood up to stop it going in my hair, but amazingly I didn’t get even a speck on me, it had splattered all around where I stood! My daughter tells me I was unlucky!

Inspired we are by what I can only describe as “the greatest show on earth”, each year me and my other artist friends at Somerset Crafts make work for our annual Starling Exhibition.

I began a series that ended up developing fairly spontaneously. After making the first piece (which ended up being number 4) I then started to scrawl a pattern of birds on an old envelope, and I made each piece by matching one to the next, at the same time keeping in mind that each one could also be an individual piece of work. So there was no grand design or cartoon, and the andamento (flow of the tiles) around the birds was drawn onto the board as I went along. Making work this way is a bit of a risk as the andamento should really be planned well beforehand! However I was in one of those “I have to get on with it” moods and there was no time for proper planning. That is the trouble with mosaic, it is so slow, and I always find that half way through a project I want it finished as my mind has moved on to new ideas that I want to start!

Last year I experimented and made this piece using iridescent black glass tiles that I cut into bird shapes. It was successful and  swiftly found a new home, so I decided to develop the idea.

The first one (now number 4) I made and grouted all in black, but then I decided to re-grout it using a grey on the yellow glass, because once I had made them all and looked at them un-grouted I could see how well the andamento worked around the starlings. I think a black grout would have been too heavy in the sky where it was yellow and blue and would have distracted the eye from the flow of the tiles. So it was necessary to use masking tape to grout the areas in different shades of black and grey. By using a black grout next to a grey (reds are grouted in black and yellows in grey) it is possible to blend them along the gradual colour change i.e. through the oranges, as it is being cleaned off.

When the masking tape comes off there is a ridge of grout that then needs to be removed. 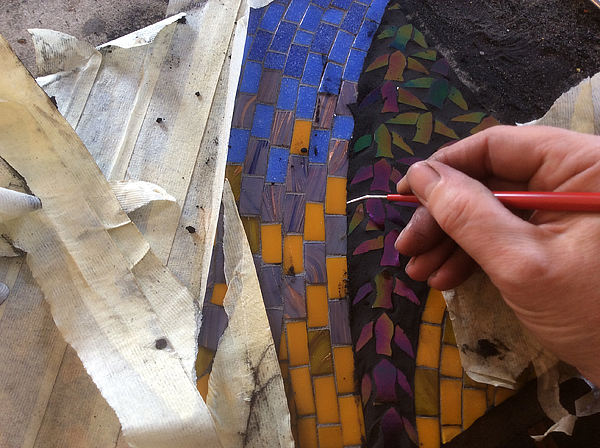 This work is called “Beautiful Black Clouds“, it is now displayed in Somerset Crafts gallery. Each piece is for sale, and I wonder who dares to buy one and split up the flock!

This website uses cookies to improve your experience while you navigate through the website. Out of these cookies, the cookies that are categorized as necessary are stored on your browser as they are essential for the working of basic functionalities of the website. We also use third-party cookies that help us analyze and understand how you use this website. These cookies will be stored in your browser only with your consent. You also have the option to opt-out of these cookies. But opting out of some of these cookies may have an effect on your browsing experience.
Necessary Always Enabled
Necessary cookies are absolutely essential for the website to function properly. This category only includes cookies that ensures basic functionalities and security features of the website. These cookies do not store any personal information.
Non-necessary
Any cookies that may not be particularly necessary for the website to function and is used specifically to collect user personal data via analytics, ads, other embedded contents are termed as non-necessary cookies. It is mandatory to procure user consent prior to running these cookies on your website.
SAVE & ACCEPT
error: Content is protected !!