This time last year I posted a blog about the Olympic sculpture project “Art at the Edge” and my involvement as a guest artist. Finally I have the time to start my sculpture for it. I decided to make a sculpture that would be about the experience of being an Olympic athlete, a study of the physical and psychological effect of sport on the body. That being of sweat and of tears. To remind you of my idea here is my original  sketch.

After thinking about different ways to make the structure (chicken wire and mesh, concrete casting using various moulds) I decided that the easiest way would be to use expanded polystyrene. I used it for my “Mother of Ruby Lips” mosaic so I knew I would be able to get a nice smooth surface with it, it would be light and I had a large sheet left over from insulating my workshed!

I cut out four shapes from the polystyrene (well ok, one of them was cut out of two pieces) and stuck them together using a new glue they use in the building trade called “sticks like” (it appears they have taken off the word sh*t from the end, maybe  so we can find our own word. I would imagine this would be different depending on which part of the UK you are from!) 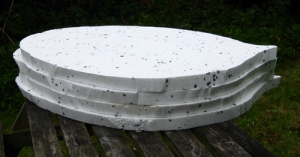 Now for the fun bit! I used a hot wire to get the basic shape.

Expanded polystyrene is all very well but it gets EVERYWHERE. As well as these small chunks all over the garden (yes I should have used a tarpaulin), there is snow and  nuclear fallout all over my clothes in my hair and my eyes. Why do we do it??

Come back soon for the next part of the sculpture.

Art at the Edge