It is said that the Irish Saint Brigid (of Kildare) visited Beckery chapel just outside Glastonbury in the 5th Century AD. Although the chapel is no longer there I went to find the hill (Brides mound) where it once was. I wish I had been in on the recent excavations where they re-found seven skeletons for carbon dating. (Excavations during the 1960’s uncovered a cemetery of at least 50 skeletons believed to be monks who used the chapel) It might have been easier to find if I had gone with the archaeologists!

Me and my partner spent several hours trying to find the hill, it didn’t seem to be where google maps said it was. We had to resort to books in the library and finally after a good walk along the river we found it!

The hill was quite unremarkable and there was no evidence of recent excavations, they did a good job of covering it all up again. 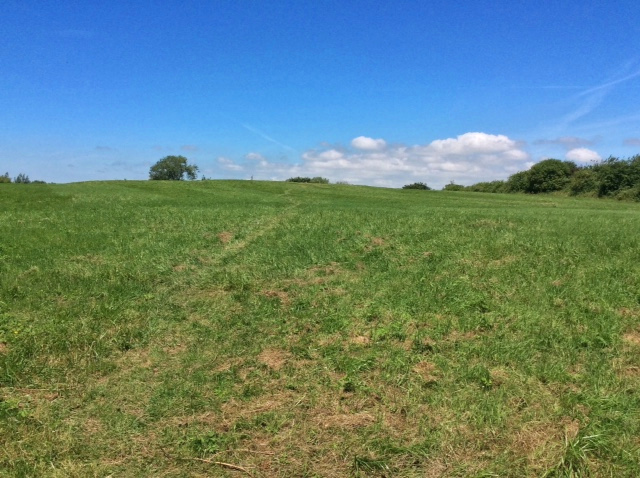 But it has a good view of one of the old tannery buildings and the Tor in the distance! 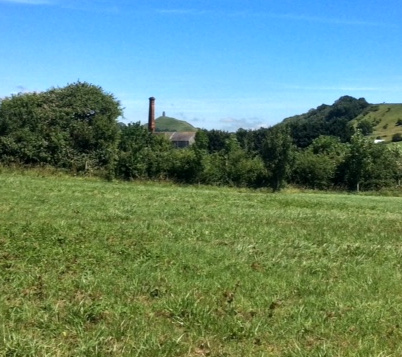 Saint Brigid is venerated in Glastonbury as the original Celtic goddess who holds the eternal flame as midwife and earth mother. In the town there is the Saint Brigid healing centre and just under the Tor there is a shrine at the White Spring .

On the walls of St. Patrick’s Chapel at the Abbey, murals painted by Fleur Kelly depict the saints in a style appropriate to early 16th Century. This is Saint Brigid depicted with a cow. She is patron saint of many things including milk maids!

To return to the story, when Saint Brigid left Beckery Chapel legend has it that she left some of her belongings behind; a bell, some jewellery and her bag. (I don’t know why she would leave her bag behind, perhaps she in a hurry or maybe she never returned to Kildare and died at Beckery)

I chose to make her bag for the Guardian bird’s relic. I used cement and mesh and gilded it in silver leaf, then stained it with tea and rust to make it look old. I hung plastic cows on the bottom as a nod to her patronage whilst referring to the modern plastic collectible world our kids live in. The cows were black and white Friesians but I painted them badly in white with red horns, the colours associated with her cow.

The heart bears the Saint Brigid cross which was a Celtic symbol associated with Brigid. It was originally made of straw, symbolized the sun and was hung above people’s doors to warn off evil. 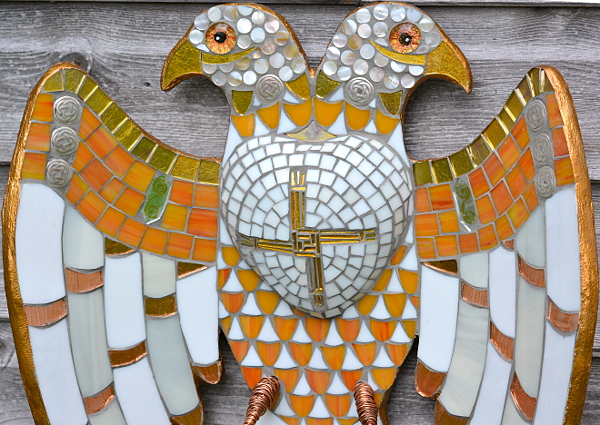 This is the fourth Guardian bird in the series, please refer to the last posts to read about the others! 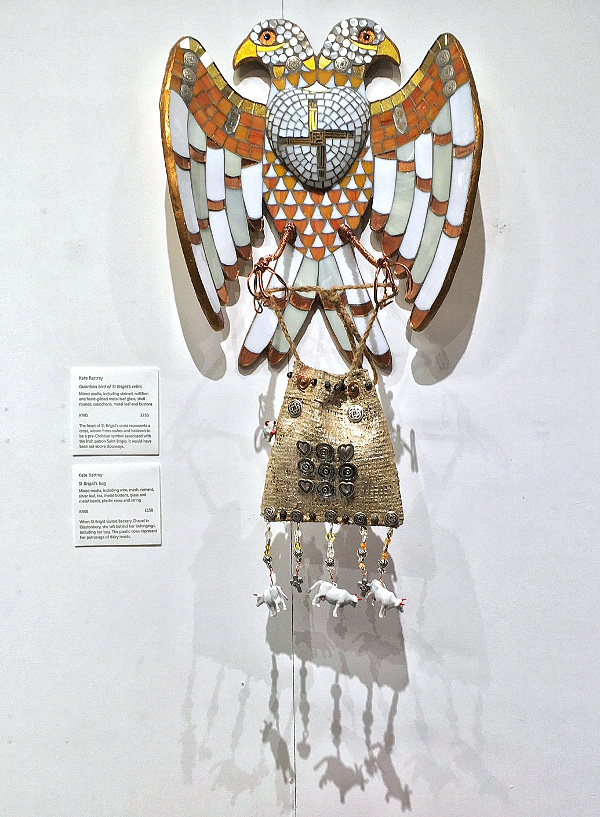 You can see this one plus the guardian birds of relics of 2 other saints, King Arthur and Queen Guinevere birds and a living rock legend guardian bird, plus other pieces of work at Glastonbury Abbey’s exhibition Traces Revealed which continues until January 28th 2018.

UPDATE: Now available to buy on my shop: rattraymosaics.co.uk/shop/birds/double-headed-eagles/

.. If you enjoyed reading this post please consider supporting my work and buying me a coffee …

This website uses cookies to improve your experience while you navigate through the website. Out of these cookies, the cookies that are categorized as necessary are stored on your browser as they are essential for the working of basic functionalities of the website. We also use third-party cookies that help us analyze and understand how you use this website. These cookies will be stored in your browser only with your consent. You also have the option to opt-out of these cookies. But opting out of some of these cookies may have an effect on your browsing experience.
Necessary Always Enabled
Necessary cookies are absolutely essential for the website to function properly. This category only includes cookies that ensures basic functionalities and security features of the website. These cookies do not store any personal information.
Non-necessary
Any cookies that may not be particularly necessary for the website to function and is used specifically to collect user personal data via analytics, ads, other embedded contents are termed as non-necessary cookies. It is mandatory to procure user consent prior to running these cookies on your website.
SAVE & ACCEPT