A lively summer workshop and tour

I had a lively group who came to the workshop at Wells museum!

This included my two youngest kids and friends.  Most only stayed for Saturday,  but one student did both days, so on Sunday she came to my workshed.

Pictures of the group and their mosaics are on the workshop page on the menu on the right, although I have to wait for photos of Marissa’s as she spent  the time planning, cutting tiles and sticking the more tricky bits down with my help.

The group didn’t have time to grout , the glue wasn’t dry enough,  so they grouted some coasters that my daughter had made, this giving them the hands-on experience needed. Then they left with grout in bags to finish the mosaics at home.

We were blessed with lovely weather for the tour, but unfortunately there were only three of us plus my daughter and her friend as two who had planned to come had to tend to the sick and go to bed with summer flu!

We still had a good time. We also had an additional part to the tour which was a visit to my friend and assistant Jean’s new studio. Jean has attended my workshops since 2006 and she is becoming a very accomplished mosaic artist. I can’t give her much more advice now, but she likes coming to the workshops and in return she helps me unpack the boxes of tiles, clear up and pack the boxes back  into the car,  prods me if I forget to mention something and reminds me to bring things that are becoming low in my stock.  She is a very special friend, and mosaic workshops  wouldn’t be as fun without her! 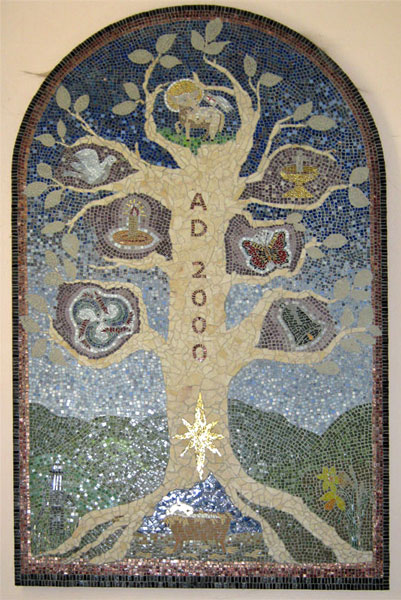 After visiting Jean’s studio we went into see the two mosaics in St Pauls church in the village of Easton, which were made by the villagers. The Easton  Millennium  mosaic in 2000  and the other in 2004 – to mark the 160th anniversary of the church.  They are quite impressive and very well made. A mosaic artist from Bristol helped them plan them and start them off.

One of the best parts of the day for me was seeing the progression of  Philippa Threlfall’s ceramic mural.  Now nearly at completion, here is Phillippa with a section of the mural (I need a camera with a wide angle lens to get it all in).  The mural is for a Waitrose store in Cheshire  and will be installed soon. Like other murals Phillipa has made , she will use slate for  the sky , split with a hammer and  chisel.  As with many works of art there is a refining process involved; unsatisfied with the colours some of the ceramic pieces have taken on in the kiln, Philippa  refires them until she gets the colours she wants. Once the pieces are ready they are laid into a bed of fibreglass resin, in panels ready for installation.